Drug Courts in the Americas: A report by the Drugs, Security and Democracy Program 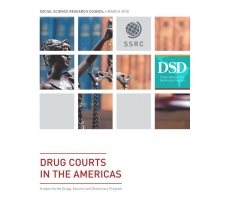 Drug courts in the United States are presented as an alternative to incarceration for people arrested for minor drug offenses where drug use is considered an underlying cause of the crime, thus theoretically serving as a tool for reducing prison and jail populations. The United States has nearly 30 years of experience with these courts, which have spread to all 50 states as well as US territories. Many countries have looked to the US experience with drug courts as a model to be adopted. While the United States drug court model has been embraced by other countries around the world, perhaps the most organized efforts to expand this policy are those currently underway in Latin America and the Caribbean.